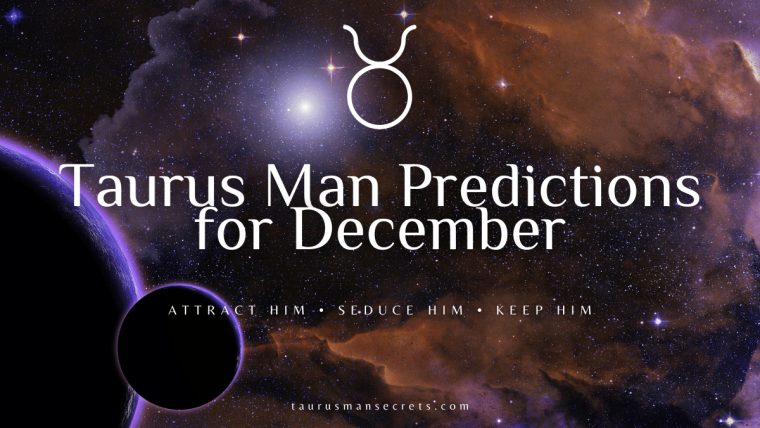 Hello, my darlings, how’s this holiday spirit treating you? I hope you’re well rested and ready to rumble, for I come bearing gifts – the Taurus man predictions for December are here, and I want you to join in on this party. Let’s go!

The first week of December puts the Taurus man in a sensual mood, however, he might develop a fear of water, or have frequent dreams about drowning. This is a great time to skip the dating phase of your relationship and move right onto the passionate intimacy if you’re up for that.

On the 8th, there’s a Full Moon in Gemini, and the Taurus man should prepare for an… ‘evolution.’ Now is a great time to work on his dietary habits, as well as to start learning something new, or practicing a fun and intellectually-challenging activity with his lover or partner.

The third week puts the Taurus man in an inquisitive and brave mood. He will be much more open to new and fresh ideas during this week, so it’s a good time to do something out of the ordinary and cook some dishes that neither of you has tried before.

The final week holds a Super New Moon in Capricorn that takes place on the 23rd. This is a great opportunity to do something new and bold. It’s also a great time to take your relationship to a new level and experience new horizons together.

The Sun’s Rays Cast A Strong Light On His Shadow

During the first week of December, the Taurus man’s focus will wander among the dark and sensual corridors of the psyche. The eighth field of his chart will be strongly illuminated, and he’ll be gifted with a sudden positivity that neither he nor his loved ones are used to.

His social life will be filled with interesting events and meetings with people from the past. It’s possible for him to have dates or social gatherings near water. He might even develop a certain aversion to big bodies of water at this time, as the Moon will closely tie his eleventh and twelfth houses.

While we’re on the topic of the twelfth house – his dreams (and fears) will be active during this time, thanks to the Moon touching upon Chiron in his twelfth house. This can make him anxious more than usual. Good thing his eighth house is strongly illuminated and he has an opportunity to delve deeper into his fixed psyche and seek out the ‘demons’ that have been haunting him.

This is a good time for booty calls and sexual resolve of emotional traumas. The Taurus man will be funnier and more relaxed during this time, and this property of his mood can be used in a more constructive way to help him better himself in the long run.

The second week kicks off with a Full Moon in Gemini, which takes place in his second house of finances and diet. The Moon and Mars are both ‘attacking’ Venus – his ruler, so this might be an especially delicate or mentally trying time for the Taurus man.

This is a good time to start a diet or to finalize a dietary project that has been started some time ago. Either way – it’s a good time for a dietary change, and to put more mindfulness into what goes into his body. He might need a reminder or a little push for that change to take place, but now is a perfect time for something like that.

It’s also a good time for him to learn his lover’s native language, or to start language courses with his partner in order to go to the next vacation destination prepared. I’m not saying that just because – this new activity can prove to have lasting and positive consequences on the plasticity of his brain.

It can also be a perfect activity for a fixed nature such as his, that brings him and his lover or partner closer together. The couple that learns together, stays together. It’s all about that evolution.

Romance And Philosophy – The High Tides Of This Week

The third week finally puts a full-blown light on the Taurus man’s field of romance. His love life will receive an interesting philosophical turn. This is a great time to go to thought-provoking art exhibitions or see movies that are not mainstream.

Spending time together, locked in mind-stimulating conversations, experiencing new things, and trying out dishes you’ve never eaten before, can be a strong aphrodisiac during this time for the both of you.

He will find it easy to express his ideas and emotions (verbally) at this time, thanks to a trine between Mercury and Uranus Retrograde. When Venus progresses a bit more and makes a strong trine with Uranus, you can expect him to act out of the ordinary and to be (much more) open with his feelings, than he is used to.

This third week is a great week to experience something new and different with your Taurus guy and to run some new and fresh ideas by him, that would usually smell too much like ‘change’ for his sensual tastes; but now, he just might go for those fresh ideas.

Read more: 4 Sneaky Ways To Melt The Heart of a Taurus man

The fourth week of December brings about a Super New Moon in Capricorn, and this whole stellium makes a strong connection to Uranus Retrograde in his first house. This means that this lunation will be extremely important to the Taurus man on a personal level, as well as philosophical.

If there ever was a destination or a language he wanted to visit or learn, this is a perfect time for that! Laying the foundation of something new and lasting is the right move for this moment in time.

This week holds the potential for further career and public development for the Taurus man. He should feel brave and free to try out new things when it comes to his career. Where his love life is concerned – there’s nothing turbulent there, but this week provides a good opportunity to deepen the existing relationships.

This is a perfect time to make some changes to your relationship, like moving in together, or going away for long-distance travel. Going public or meeting each other’s parents also sounds very profitable during this period. So be brave, and go for it!

Well, there you have it, my dear readers – the Taurus man’s December in the palm of your hand. His mood will be lighter and funnier than you’re used to. And there are ample opportunities for both personal and relationship growth.

The Taurus man will be more open and flexible during this month than you’re used to as well, and that’s a great thing – just make sure you use it.

His feelings will be out in the open during the first half of the month, and the second half of the month holds a great chance for upgrading your relationship. Take a deep breath and go for it, the Universe is on your side during this time.

I sometimes hear from readers that while these Horoscopes are helpful for their romantic lives, they crave more detail and more specificity for them. This is totally understandable, and I have figured out a way to make sure you get all the information that you need to take advantage of transits and to know what pitfalls to avoid.

I’ve created a spot here where you and I can talk personally about your own concerns and how to best create the relationship that you have been waiting for. I love talking to my readers and getting to know them as people – and truly, what have you got to lose? Connect with me here.

Wishing you love and light on your journey.

P.S. I just released the 110-page Taurus Man Secrets for 2023! It’s the most complex digital yearly forecast I ever did for Taurus men. You might want to check it out!