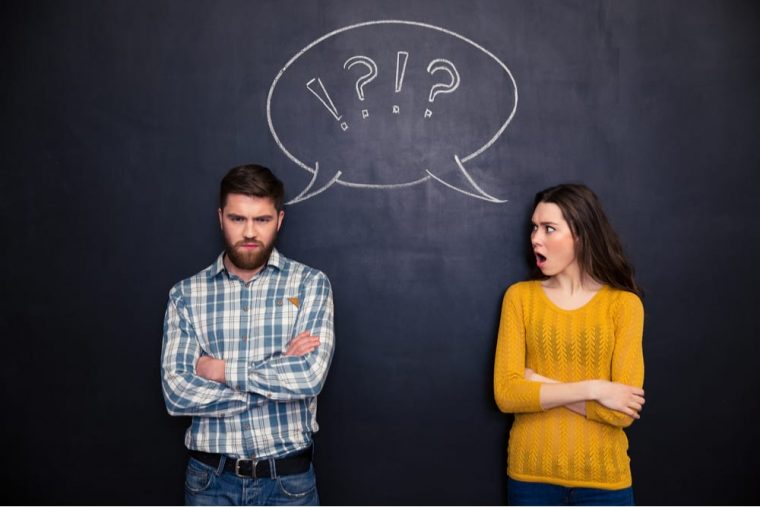 Sensual, goal-oriented Taurus men are some of the most commitment-minded fellows on the planet, but even this Bull holds back once in a while. For a Taurus, the tortoise’s approach is more appealing than the hare’s, so if you’re down for the slow burn, ask yourself these three things! I’m grateful that you’ve found your way here because I can help you out. I’ve outlined the 3 most prevalent reasons why Taurus man avoids commitment and my best tips on how to flip it around. Let’s dive in!

Trust is one of the most important things to a Bull. It’s the bedrock of security—his ultimate endgame. And to be trustworthy, you have to be as consistent and reliable as a Taurus himself.

Everyone can be forgetful and flaky once in a while, but when it’s chronic, that’s when the Bull wants out.

When he tells you secrets, do you keep them, or maybe just tell your best friends and favorite coworker?

Do you flirt with his friends? Go through his phone? Pick little fights when you’re moody? Repeatedly let his indoor-only cat escape?

The list of possible offenses is long, and the Bull’s capacity for forgiveness is limited. So if he starts thinking you’re someone who won’t be there for him, your clock is ticking. Actually, it’s been ticking this whole time.

Tauruses like to get a decent read on someone before they let them into their lives.

Since he knows the enormousness of his own heart, and the sluggishness of his emotional metabolism, he knows it won’t be worth it to get with someone unreliable.

Falling truly, madly, and deeply takes time for Tauruses, and getting over heartbreak could take them three times longer.

To Taurus guys, living an ordered life spells success, whether it’s emotional, financial, or creative, and they’re eager to fit you into that equation! He wants to believe in you and your power to fulfill his hopes.

True bon vivants, Taurus men want to “have it all”: beautiful houses, stocked fridges and closets, deluxe cars, bigtime careers, and the romance of their lives.

They want the status of obvious, tangible gains—and flakes and drama queens move the goalposts too much.

If you want to get serious about the Taurus in your life, your number-one priority should be to gain his trust.

Keep your word. Make him feel heard. Show your vulnerability and tenderness. Once you’ve done this over and over again, your Taurus will hold you tight and breathe a sigh of relief.

2. Are Things Moving Too Fast?

Your Taurus guy really doesn’t like to be rushed. Remember—tortoise, not hare. He likes to let information seep deeply into every pore until he can understand it with his whole body.

Once he understands, he can plan. And once he can plan, he has a success story on his hands (quite literally—Tauruses are known for their tactile expertise).

Taurus is ruled by Venus, the planet of love and beauty, so you can trust that Taurus is a romantic—once he gets there. Then, you both have to get there together.

Shotgun weddings are for Sagittarians or Aquarians, not the Bull. Love is more like a 5-course meal, to use the (perfectly Taurean) analogy of food, and the Taurus man wants to savor each one.

Of course, that’s not all that’s going on. To savor is to eventually process, understand, and know. A Taurus man is deeply rational and likes to have a grip on what’s going on, as it gives him control.

Nothing will make him squirm more than an urgent, abstract, or unexpected situation.

Labels are great for a Taurus, but they must be earned from a baseline he can understand. He may even have a milestone system in place before he can say you’ve gone from “crush” to “dating” to “girlfriend.”

Jumping the gun when you haven’t earned it is a big no-no in the eyes of a Taurus. To grow his heart a few sizes bigger, you must be patient.

Let things unfold naturally and steadily, as game-playing will only throw him off course. Gradually open up to each other in a way that feels safe and caring.

If you feel like you’re both getting carried away, step up and gently tap the brakes—he’ll respect you for it and come away trusting you more than ever.

Unlike other zodiac signs, the Taurus relishes quiet intensity and slow reveals, and he won’t lose interest if your relationship isn’t fiery from day one.

To this earth sign, a gradual ascent doesn’t promise a roller-coaster drop. It’s groundwork for a long, satisfying future, which is what the Taurean wants someday.

Read next: 5 Ways To Tell If There’s A Future With Your Taurus Man

3. Is Life Too Crazy Right Now?

A Taurus bogged down by school, career goals, family troubles, or otherwise will likely not have time or energy to give to a relationship. A heartbroken Taurus is in a similar predicament and doesn’t bounce back easily, unless it’s to have regular sex.

For Tauruses, true love is both an achievement and a point of pride, and the Taurus man wants to do it right.

He wants to be able to care for you, whether that means living together and actually sharing finances or giving you his undivided love and attention.

Despite their highest hopes, a Taurus isn’t willing to sacrifice one cornerstone of success for another.

And yes, when we talk about Taurus, we’re talking about relationships as an indicator of success!

A lot of Taurus men are very ambitious, and all of them are hardworking in their own way.

They have a singularity of purpose when they’re feeling determined, which is nearly all the time—unless they’ve suffered a difficult setback, in which case they tend to curl up, couch-potato, and mourn with sugary starches and vino.

Even if a busy Bull were to attempt to juggle you with everything else, he probably wouldn’t be very good at it. Multitasking is not a Taurean strong suit, even when it’s required.

This is Taurean quandary is harder to solve than the first two, since you can’t really force someone to drop what’s important to them.

In this case, it’s good to be direct. Talk to each other!

If it’s a serious relationship you want, tell him and see what he has to say. Maybe you can start seeing each other in a few months, when the madness has died down.

Maybe sex is all he has room for, as long as you’re truly on the same page!

Sometimes, though, no is no. With a Taurus, it won’t be personal—just the facts.

If handled right, however, he will remember your grace and think of you fondly, leaving the door open. Who knows? You may have a beautiful future together after all.

So there you have it—the three main reasons a Taurus man avoids commitment. I hope they’ll help you figure out the next step to take. In the meantime, I’d love to hear your story. What’s holding your love back? Share with me and other Taurus lovers in the comment section below!

I’m so excited to offer a new service! I’ve been wracking my brain to think of ways to connect better with my readers and I think I’ve found the solution with my VIP Consultations.

I’ve had great feedback so far and I feel closer to my readers every step of the way. Don’t hesitate to book a reading with me!

>>You can book a VIP reading right here!