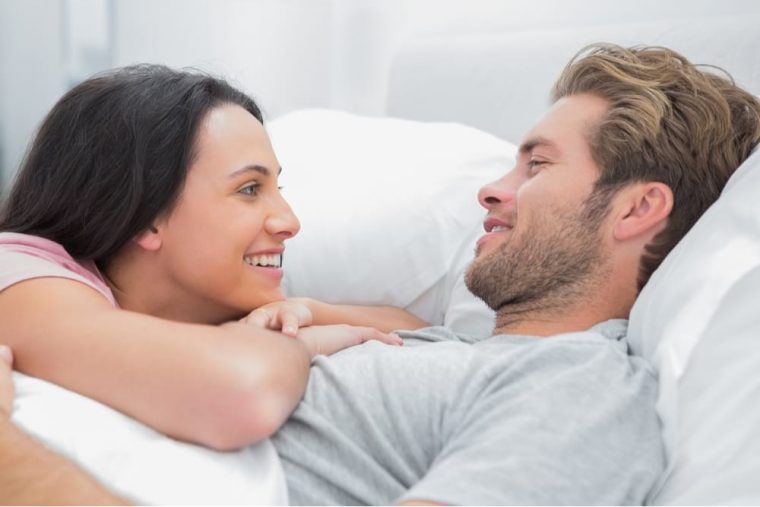 Bulls have big romantic hearts, and when they’re in love, they want to give you the moon! But your Taurus guy probably isn’t known for his communication skills—so read on to find out whether he’s ready to fit you into his future!

Making mind leaps about a situation isn’t really the Taurus way—and a Taurus doesn’t like semantics.

But he does like an existence where there’s a place for everything, with everything in its place. His way of understanding is to hold, construct, and define the world around him.

You’ll know if your Taurus sees a future with you if he’s comfortable with defining the relationship. You know you’re his girlfriend because he’ll tell you so, and he’ll tell other people in his life, too—including his boss, his sandwich guy, his dog, and his parents.

If you’re just sleeping together, he’ll be just as good at calling it as he sees it. You won’t be in the dark for long. If you feel unsure, just ask him—and you’ll get your answer.

Matching his directness is a wise move in general when you’re with a Taurus man.

If you expect something more from your relationship, you’d better tell him in the most simple and straightforward way you can. He will appreciate your sincerity and may even be pleased that you want to get more serious—so long as it’s the right time for the patient Bull.

Because he belongs to one of the more commitment-oriented signs, a Taurus is likely to desire a real relationship.

To a Taurus, a label is a set of parameters with which to understand and build. He knows what the word “girlfriend” or “wife” entails and the duties and expectations that come with it—and he’s happy to rise to the occasion.

Tauruses like to give and get. You can depend on your Taurus man to call or text daily, make advance plans, and come through for you when you need him—if he’s in love.

If he’s acting aloof or erratic, repeatedly breaking dates, or showing up late, he just might not be that into you.

To him, being consistent is a point of pride and honor, a code that feels as natural as breathing. It’s not something he has to learn or remember to do—it’s built into him like a wall of bricks.

Tauruses like to go above and beyond for the people they love in tangible, measurable ways. A Taurus guy that is too busy or distracted simply won’t be able to juggle a relationship with the other elements of his life, and he won’t want to.

Love for him is an absolute to which he can willingly give his time and care.

Taurus men are known for above-average loyalty. Their traditional romantic nature and their steadfast reputation combine to make an ideal devoted partner.

However, he has high standards and regularly attaches strings to his gifts and deeds. He expects appreciation and reciprocation.

If a Taurus were ever to cheat, it’d come from feeling truly betrayed, unappreciated, or ignored. A lack of touch and sex could also isolate them from their partners.

Taurus man likes having “his person” to rely on in this life, seeing them as a bastion of comfort and affection. He sees the reward in having someone to count on because stability is the place from which he builds and grows.

He also derives nourishment best from someone he knows and understands. Unlike a Leo, for example, a Taurus is not susceptible to flattery by strangers or acquaintances and more readily trusts the opinions and affections of a close friend.

To a Taurus man, faithfulness has a warm glow that legitimizes his dreams and fortifies his sense of what true love looks like. It’s the ideal and the goal, so if it’s absent in your relationship—from either of you—this union is sunk!

A Taurus in love is grand, generous, and lavish, even if he doesn’t have a lot of cashflow.

A poorer Taurus will still find sweet and creative ways to show he cares, such as cooking for you, singing you a song he wrote, or presenting you with a bouquet of hand-picked wildflowers.

If your Bull is flush, expect to be wined, dined, and all the rest of it! On anniversaries and birthdays, you can expect a personal touch turned up to 11.

Tauruses live in the realm of absolutes and ultimates. They like the best of the best, and they want it to be beautiful, tasty, and nice, in time-honored ways you can measure.

He will probably know all your favorite things and aim to provide them, even if it’s as simple as your favorite candy bar. You might get a basket of that candy bar on your doorstep some afternoon.

He’ll also be there for you when you need him and show his love through selflessness.

This sign is always happy to give you his jacket when you’re cold, and if you ask him for much bigger favors, he will usually deliver without even blinking.

Read next: Taurus Man Dating Style Can Be Strange – Be Ready for This

An ideal time to be with a Taurus is when the roads are clear for both of you and your goals basically align.

Tauruses are planners—financially, emotionally, and otherwise. They like to know that everything is progressing on schedule and that there are pots of gold at the end of the rainbow.

A Taurus man feels confident and relationship-ready when he has a good living situation and money in the bank. He wants to be ready to provide in the way that makes him feel confident.

Tauruses like to impact their environment in a way that makes sense to them, and that outlook extends to their loved ones. They like to be in positions of authority that also enable them to nurture and shape, such as coaching or parenting. Being a caretaker makes the Bull feel whole and in control.

For this reason, building a foundation is crucial. You don’t have to be settled or have everything figured out to have a future with a Taurus, but they do respect someone who knows what they need and want and demonstrates this in a measurable way.

The Bull’s romantic nature can lead them to stick with things, even to their detriment. That pie-in-the-sky concept of true love is a major motivator. If you’re a long-haul kind of girl who sticks by him, your Bull will want to go the distance.

There are many reasons a Taurus could get cold feet, but as you can see, Taurus is very relationship-oriented—so long as he feels safe and secure.

What’s your story—how did you land your Taurus guy? Or does it feel like he’s slipping away? Tell us in the comments below!

Is shy Pisces a love match for steady Taurus? What about a flirty Libra? Here’s how to find out your compatibility score with my calculator: https://annakovach.com/start-quiz/